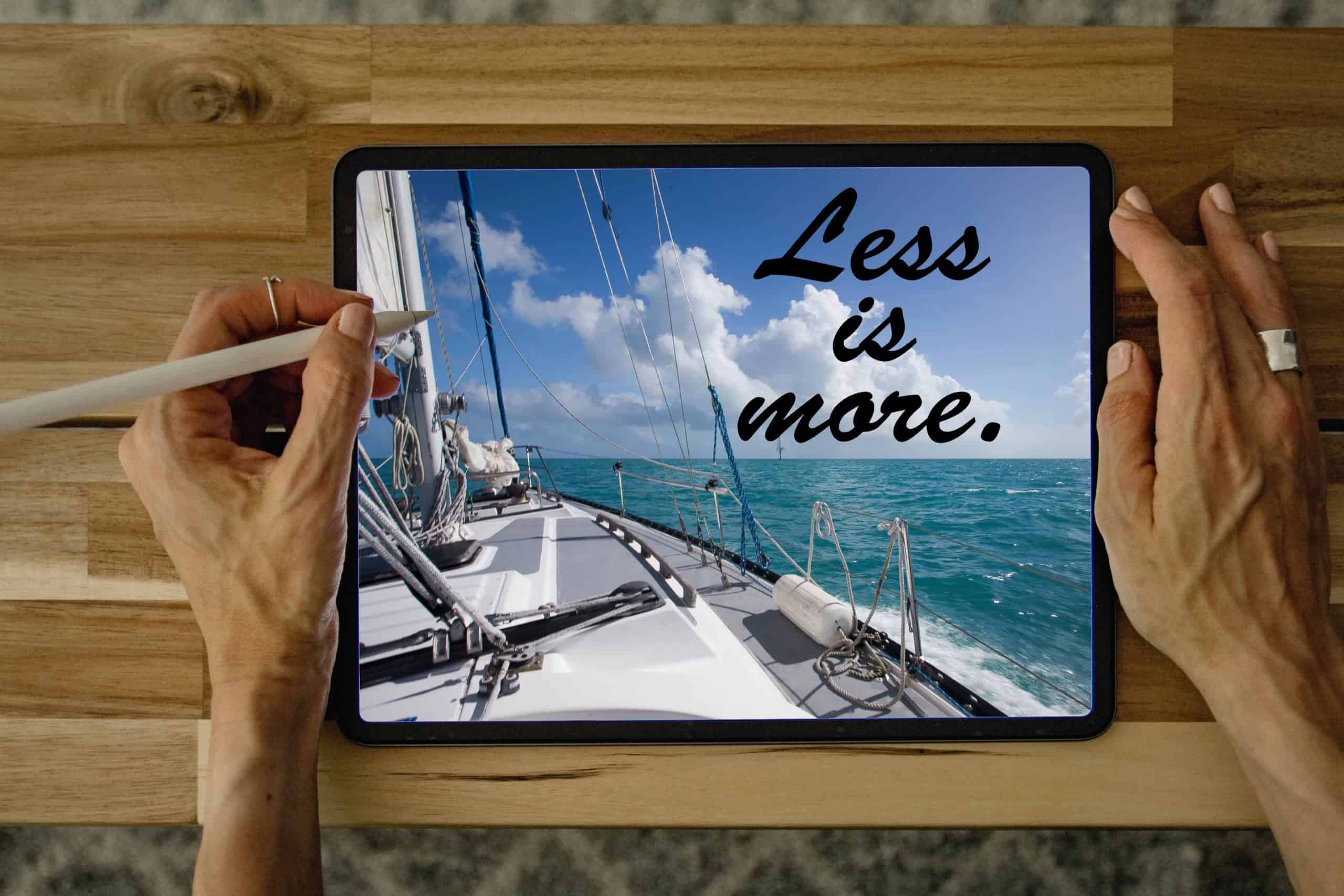 Everybody likes to recommend their favorite books, right?

Here are the books I mentioned in this episode that I’ve found to be really helpful—about cruising, and about trading the push lifestyle for the pull lifestyle.

In the spirit of this episode, the links are to hardcover and paperback editions instead of Kindle! However, you can always select the Kindle or audiobook version instead.

Unplugging and the “Pull Lifestyle”

Make Time: How to Focus on What Matters Every Day, by Jake Knapp and John Zeratsky

This is the genesis of the “distraction-free iPhone” (or whatever smartphone you have); but that’s just one part of adopting the “Pull Lifestyle” and making time for what truly matters to you.

Their method of selecting a single highlight for the day and reviewing each evening if you made time for it (I’m way oversimplifying it here) and tactics for avoiding distractions and staying focused on what matters have been super-effective for me.

And if that’s not enough, co-author John Zeratsky is a cruising sailor…so if ya seen him cruising the west coast aboard s/v Pineapple, tell him Thank You!

The Cruising Life: A Commonsense Guide for the Would-Be Voyager, by Jim Trefethen

This is the book that talks about practicing the cruising lifestyle on land. Instead of taking out a loan on a new boat, Jim counsels us to practice a little more frugality, a little more “less is more.”

He also talks about many of the “features” you don’t need on a boat. It’s a little dated in some places (notably electronics)…but then again, that’s an area the captain suggests we place far too much emphasis (and dollars) on, anyway.

The tag line on the front is:

How to set sail within five years and live well and adventurously, even if you don’t have a boat yet

I think that pretty much says it all.

Essentialism: The Disciplined Pursuit of Less, by Greg McKeown

Less ls more. A quick read but a profound one. I highly recommend.

No, I haven’t figured out how to work a 4-hour week yet. (And as the author says, that’s not the entire point.)

Many things in this book are extraneous to this podcast episode, but this book was perhaps the first to give me a whack on the side of the head as regards unplugging and focusing.

One important concept (that I just remembered I first saw in this book) is that we should consider not putting of retirement until we’re 65, but think about doing more fun and important things now. (“Mini-retirements,” Mr. Ferriss calls ’em.) So I have a feeling the huge sales of this title were responsible for the outbreak of digital nomadry we’ve seen since its publication in 2009…and may have also led to my cruising problem.

The Way of Zen, by Alan Watts

Okay, I would say this one’s for Zen nerds only.

The later parts of the book do go into (much) detail about Zen. The first part is a pretty exhaustive history of Buddhism, Taoism and Zen (Buddhism).

Also, it was written in 1957, so…I’m reading and appreciating it again right now…but it may not be everyone’s cup of tea.

The Headspace Guide to Meditation and Mindfulness: How Mindfulness Can Change Your Life in Ten Minutes a Day, by Andy Puddicombe

I am a huge fan of Headspace. “Mindfulness” is a term that gets tossed around a lot these days…but damned if we don’t need to hear it.

In a lot of ways, this ties in nicely to some of the ideas in Make Time (above). And if you don’t think you need a little mindfulness practice, try this experiment:

See if you can sit down and eat a meal, by yourself, without turning on the TV, opening a book, or scrolling through some kind of distraction on your smartphone or tablet.

If you managed to do it, you’re probably already a cruiser. Most likely it felt like torture, and you probably could use a little mindfulness practice in your life.

Headspace was founded by Andy Puddicombe, who wanted to try to bring some of the benefits of Zen meditation to a western audience, minus the more overtly spiritual or religious overtones…and he succeeding wildly in this.

The book is a great introduction, but I also use Headspace.com…that’s where all the real magic is. (I do not use the app—or many apps at all—because of my unique privacy/technology concerns, so I, um, may or may not have a pseudonymous account using a masked credit card. Headspace works fine on laptop or desktop; that’s how I use it. There is a free trial, last I checked.)

The Long Way, by Bernard Moitessier

As far as I’m concerned, the most beautifully written book on sailing, ever. And when I say “beautifully written,” I don’t mean all wordy and pretentious like William F. Buckley’s sailing books. (Not that there’s anything wrong with that.) No, I mean simply written, in a way that conveys deeply the beauty of the sea and sailing upon it.

Come to think of it, Moitessier’s original version is in French; so for all I know, it could suck. But I doubt it. The magic of the original (there are a couple of examples of Moitessier’s handwritten pages scattered throughout this translation) seems to have carried over faithfully into this English version.

The old cover is way cooler, IMO, with the retro slab serif font and crazy photo of Moitessier on deck in the Southern ocean. I see the old cover available on Amazon, but it looks like only used copies, except for one in “New” condition for about $50 USD.

Sensible Cruising: The Thoreau Approach : A Philosophic and Practical Approach to Cruising, by by Don Casey, Lew Hackler and Bobby Basnight

Lots of great advice on how to make cruising simpler…and quotes from Thoreau’s Walden. What’s not to like?!??

This was actually the first book that tipped me off to the idea that, yes, “less is more” in boating, too!

I think you can see the influence of this book, along with The Cruising Life, in my book How Not To Sail.

How Not To Sail: Screwing up is part of cruising. Let me show you how!, by Bradford Rogers

Speaking of which… Yes, I have a book too. And I highly recommend it! (But don’t take my word for it, you can check out the reviews yourself.)

If you’re listening to the podcast, there’s a strong chance you already have this. Still, I’m sure there’s someone in your orbit whose life hasn’t been ruined by cruising yet. So maybe they need a copy, eh? Just sayin’…

Featured image includes a photo by Kelly Sikkema on Unsplash. Image of boat by Your Humble Narrator.

Photo illustration of drowning person by Kelly Sikkema on Unsplash

What’s wrong with my head?

To The Boat Yard!