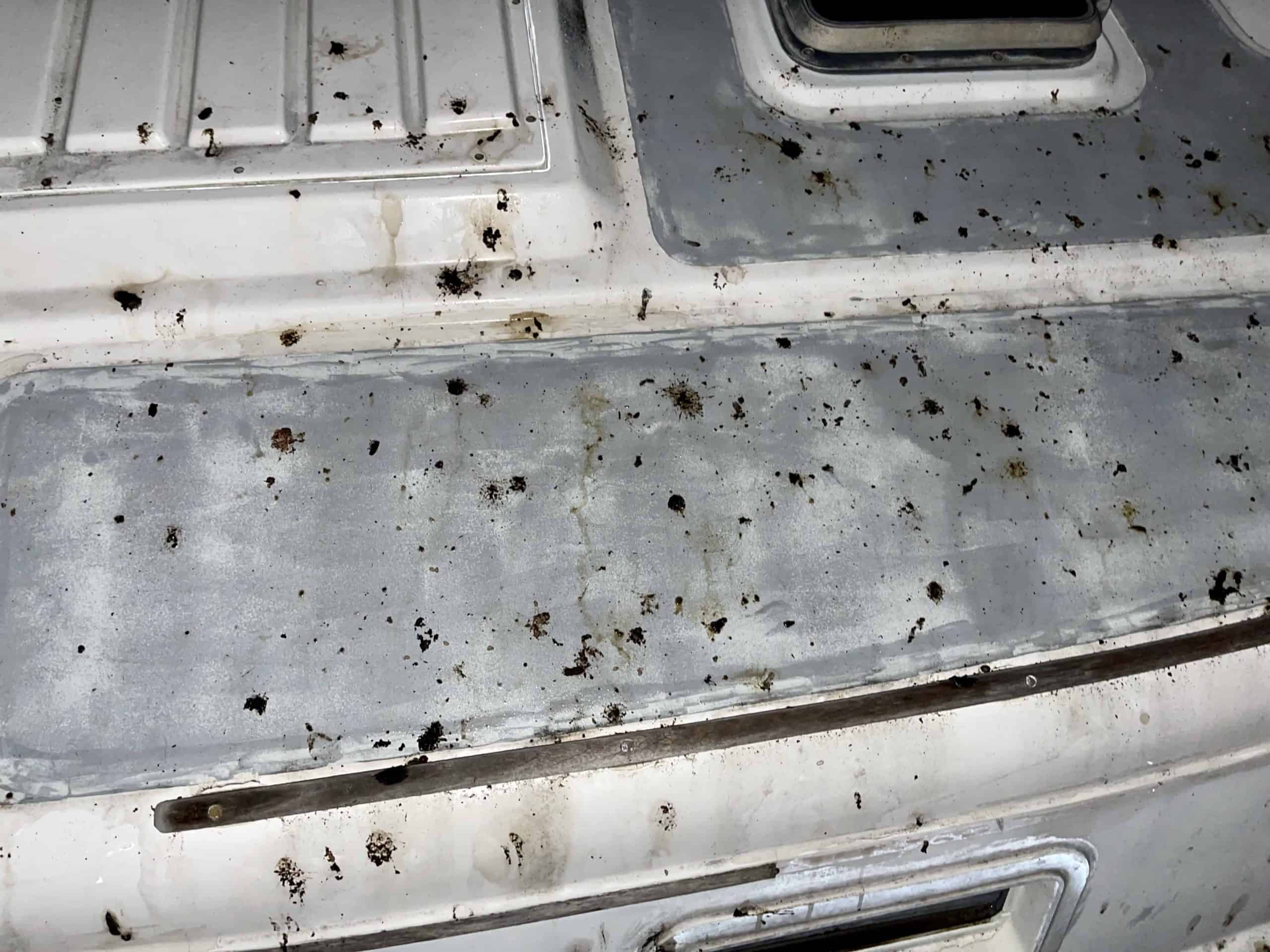 Editing and mixing by Maximiliano Frini.

*Thanks to Rick Smith for his location foley assistance, to wit: dropping the “bird pellets” on the cabin top…!


Subscribe FREE and never miss an episode!
(Works simply on whatever device you’re reading this on.)

This first episode of Season Two involves our feathered “friends.” Sometimes in a marine environment they can cause problems.

…to the grackles, crows and parakeets that perch on the rigging every morning and evening (especially in the winter) and make the deck look like a Jackson Pollack painting…

…our feathered friends can wreak havoc on a boat.

Our friend Scott sent in a picture of his solution to the osprey-on-delicate-instruments problem.

What’s YOUR solution for the birds? Or do you have a good birds story? Let me know in the comments below! 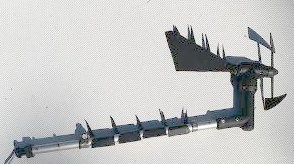 Super big thanks to Cody’s daughter (I’m not naming names of minors without permission) for this super thoughtful gift! She noticed in Episode 9 that I’d lost the Kershaw knife my friend Mark gave me for my birthday a few years back…and sent me a new one! Very cool, thank you!!! 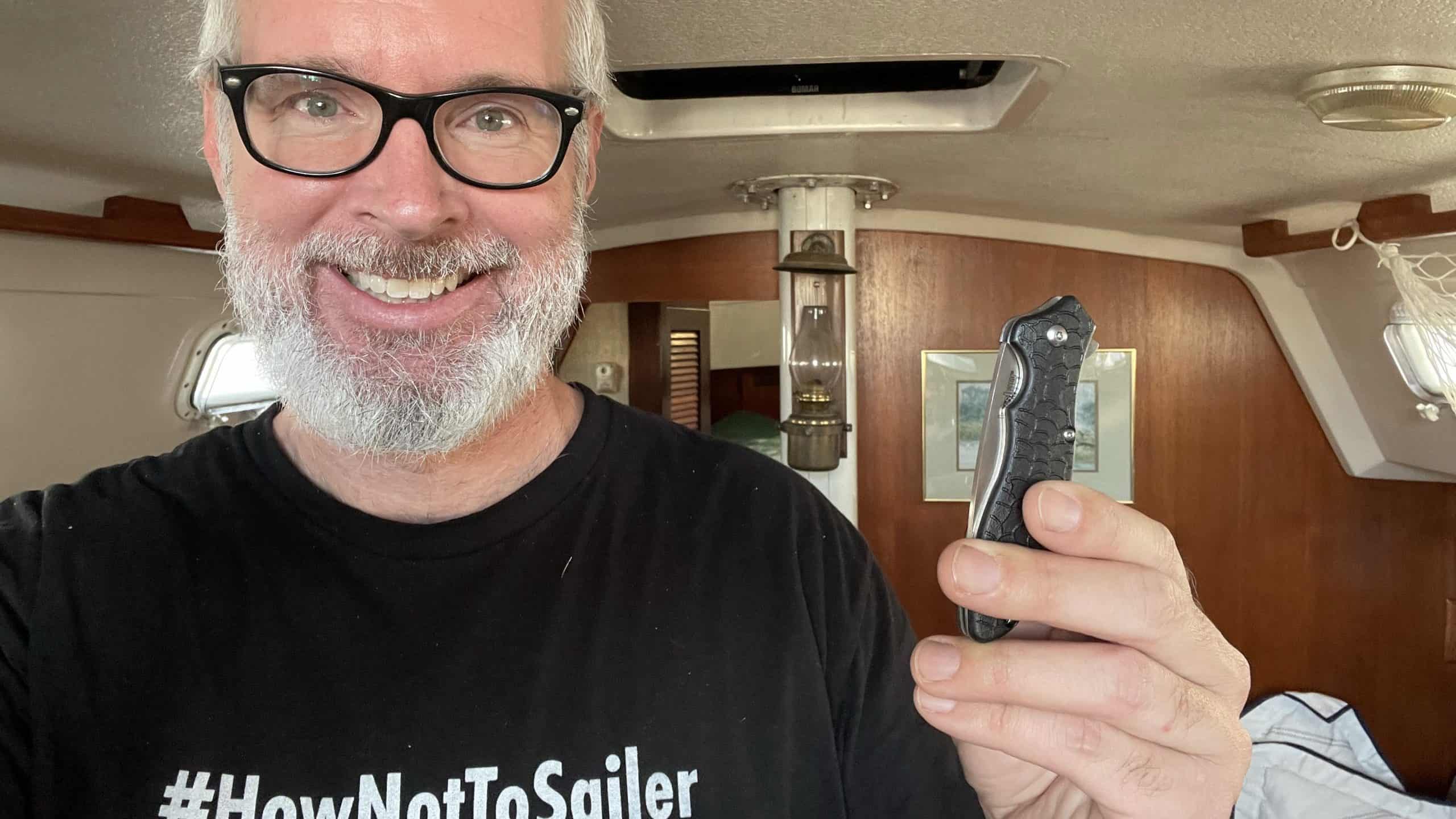 A Poem About Bird Poop…

Thanks to our friend Debby for this one! Clearly she is familiar with the winter phenomenon…

The invading marauders balance at the top of the mighty masts,
and on the shroud lines they take their stand;
Humans may think they own these boats, this marina,
but the sound of grackles dominate with cackles.

I’m down here below for another round of
scrubbing red, purple and brown stains off of my topside
There is little doubt as to who really reigns over this watery domain;
the droppings, so berried, are leaving me wearied.

The squeaks, whistles, and croaks call out amid our human voices—
in the morning and at the evening it’s a “readle-eak! readle-eak!”
The cacophony of sound reverberates and overpowers our thoughts, our conversations.
I swab the deck and sigh as the breezes blow by.

Just thinking now how beyond-my-control life can be at times—
if it’s not birds, it’s something else.
Seems like a good time to sail on out of here;
let’s just let the lines loose for a soul-cleansing cruise.

Thanks to our Patreon patrons! You are providing the ammo, as it were, for me to spend more time on the podcast and less time on “making the doughnuts.”

Transcript of Ep. 21, “Pluses and Minuses”

I should just mention in this episode that although I've bleeped most of the words that would cause any problem with Apple or certain sensitive foreign countries.

There still remain some "tier two" sort of words. And this episode is about what you might call a sort of... dirty topic

I overslept again this morning, here in my house in Atlanta.

The Admiral has installed blackout curtains in the bedroom.

I've asked the Admiral if she wouldn't prefer leaving the curtains open so I can wake up naturally.

Bradford (VO): But she's not having it.

Tanya: I don't think so.

Bradford (VO): I like to get a solid eight hours of sleep. In fact, I think it's an important part of a captain's healthy regime. But I don't want ten hours unless there's been some sort of beverage situation the night before.

Things are so different at home than aboard Jacie Sails. At home we have a toilet, actually three of them, that work with a single press of a lever; and in which you can actually safely dispose of toilet paper. We have a washer and dryer of our own. We have a four burner stove that never runs out of gas. We have a blender and a food processor, a full-sized refrigerator, hairdryers, a gas fireplace, a disposal a Frisbee-shaped vacuum that scours the room on its own, trash pickup, grocery delivery...

But there's something about being aboard the boat.

Compared to my terrestrial routine. I usually arise a bit earlier when I'm aboard Jacie Sails... for a variety of reasons.

Bradford (VO): What time I wake up is determined by a lot of things. Like how many beers or frozen drinks I may have had the previous night. Or in the winter months, one particular thing.

As I lay in the quarterbirth, I can hear the shrill complaint of an osprey. There are several of these imposing creatures in the marina. They like to perch atop sailboat masts and watch for prey.

At three or four pounds, they don't get along well with the masthead wind instruments. Also, they tend to drop remnants of their prey onto whatever's below.

They seem to frequent the same boats, and I'm glad not to have one of these magnificent animals aboard Jacie Sails.

Water bird sound so much more abrasive than their woodland counterparts. Here come a platoon of green parakeets, by far the most jarring with their shrieking. But they are not the most numerous.

From somewhere south, from whatever hellish place they spend the night, come first one company than another... Of grackles.

Little black birds, their chatter has all the charm of a thousand squeaky hinges. They light on the diagonal fore- and backstays of the sailboats until they resemble some kind of Christmas tree for Edgar Allen Poe.

As one grackle jumps into the line, the others below abruptly shift down one at a time like a weird bird train.

The lines of grackles grow. But in a minute, they won't be alone. Now come the crows.

If I'm planning to sail anywhere in public, or with The Admiral, there's only one choice. Be on deck immediately and slap the halyard against the mast to shoo them off.

Because if the main purpose of this congregation is to have a morning chat, their secondary occupation is... shitting on whatever's below them.

Sometimes you can hear it. For example, when one of the little m-----------s defecates one of the berries he's eaten, in its mostly intact and undigested form.

Many of these pellets find their way into the small scuppers and combine with regular bird shit to create a "poop plug," as it were... which ensures the scuppers won't drain.

Which means standing water on the deck.

This is the perfect way to get a face full of bird shit water when the clog suddenly dislodges.

According to my book on bird facts, crows are one of the most intelligent birds; and can not only recognize faces and remember a positive or negative interaction, but also communicate that information to other crows.

One of my surreptitious fantasies is to catch one of these crows, hold it down, and give him the same treatment he's been giving my boat.

Of course, if I'm not headed anywhere soon, or if I'm about to leave the boat, the question becomes: should I bother with the birds at all? They're just going to be back to congregating and shitting as soon as I'm gone.

Another thing is, my gel coat on the cabin top is turning to powder after years in the sun. And every washdown sends a subtle white sheen into the marina water.

If you sit in the cockpit these days, you'll come away with a white bottom. Or a white stripe on the back of your sweater.

You want some kind of Zen acceptance challenge? This is it:

Try to lie in your bunk as the birds crap all over your pride and joy.

It's definitely a winter thing.

in that case, I'd like to send these Yankee Carpetbaggers back to where they came from.

Sadly, we're prohibited from shooting 'em. I think the crows might learn after taking a few casualties, but I guess the grackles would still show up by the battalion.

So, I guess I have to get used to it.

Eventually though, like a daily spring, the crows and grackles start to move north and inland. First to the trees along 29th Avenue. Then on toward whatever else they plan to crap on today.

A few crows remain. I can't be bothered with these all day.

If I shoo a couple off my mast, they'll more or less stay on the neighboring boats. Sorry, captains.

Every season in Southwest Florida has its pluses and minuses. Wait, strike that. Spring and fall are the pluses, and summer and winter are the minuses.

Summer is insufferable heat and humidity, with massive daily thunderstorms and the occasional hurricane. Winter spares us the daily storms, but we get the birds.

But I suppose there's a positive here. The birds keep the maddening crowd away from the marina. Which by the way, now that I think about it, is an awful place.

Don't come here. The birds are terrible for those two or three winter months. And the summer heat and thunderstorms? Forget about it.

I don't even know why I keep the boat here.

I must be crazy.

Anyway, at some point right about this time of year, after the birds stop off at the marina and crap all over everything, for some reason most of them will keep going, keep flying north, stopping to decorate our driveway and fence in Atlanta filling the trees along the creek with their sounds--which has to really annoy the local songbirds-- before moving along to whatever Northern lands they commandeer for the summer.

Meanwhile, there's nothing quite as rewarding as motoring out of the marina and into Boca Ciega Bay soon after dawn, just as the black horde sails into the marina for their morning muster.

Bradford (VO): I told you it was going to be a dirty topic.

What's your favorite bird poop story? Or maybe you have some advice for everybody on how to keep the little buggers away. Let us know in the comments at HowNotToSail.com/21.

You can also find a great poem about bird poop there from our friend Debby. Not Fuel Dock Debbie, but the other Debby.

Please let me know what you think of this episode and the other ones going forward in Season Two, because we're going to be trying some different stuff.

Or whatever floats your boat. So to speak.

Thanks to Cody and his wonderful daughter for the new knife. We don't mention any minors' names here without permission, but that was super thoughtful.

Thanks to our awesome Patreon patrons for helping keep How Not To Sail afloat. If you'd like to join the crew, just go to HowNotToSail.com/Patreon.

And thanks to Latitudes & Attitudes for ruining my life. Why not 'em ruin yours today too, at LatsAtts.com?

Major gratitude to Crazy Math Lady, spontenaity, Harryeod, and Curtwpk for the nice five-star reviews and kind words on Apple podcasts. I really appreciate you.

And as always, thank you for listening.

Remember to stay away from the "crunchy bits," as Captain Pete would say, and i'll see you next time on...

How Not To Sail. Screwing up is part of cruising. Let me show you how!

Tanya: I don't think so.

Scroll back to top
powered by

Do you have a good “birds” story of some helpful advice? Let me know in the comments below!

How Not To Sail is now on RadioPublic!