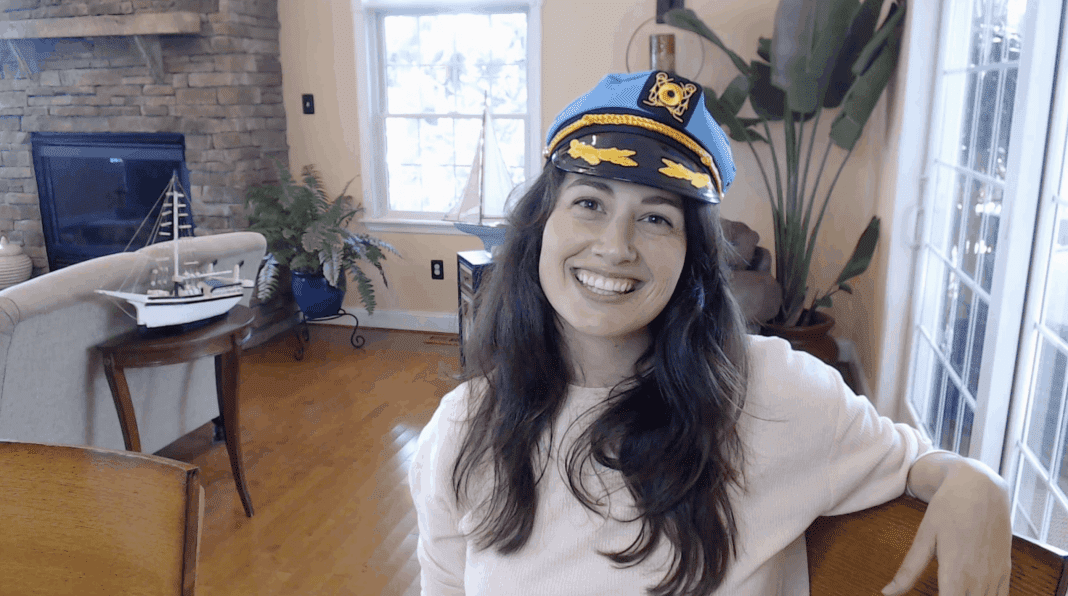 She is the hostess with the mostest at CaptainBoomies.com, and I’m honored that she’s the very first person to jump on the Patreon ship—even before I officially launched it.

I highly recommend you check out—nay, subscribe to!—her YouTube channel if you haven’t already. Captain Boomies is a much better sailor than me, having become a licensed 100-Ton captain in her twenties, and skippering a number of luxury vessels in the Caribbean—often overseeing an almost equally attractive crew, I gather. (Color me jealous.)

In her “retirement” now, Captain Boomies has taken to YouTube, with a seriously entertaining selection of videos which dovetail nicely with the whole “How Not To Sail” theme. Take for example this gem about how NOT to use 5200.

(If you’re a sailor or boater of any stripe, you’ll know exactly what that is. And you may or may not have made a similar mistake with it—once.)

And I can readily empathize with this video about a certain #BoatingFail…not that anything like that has ever happened to ol’ Cap’n Bradford. Nope.

Anyway, you get the idea. Check out her channel, you won’t be disappointed.

Absolutely coincidentally, Captain Boomies is my next guest on my YouTube channel, along with a very special surprise guest, so make sure you’re subscribed and you’ll get a notification the moment that sucker is ready to pop out of the rusty squeaking HowNotToSail machine.

The How Not To Sail Patreon channel is here…

Actually, I won’t give you a hard time if you’re not a technology person. Heck, a lot of us like sailing because we can actually get away from technology a bit. Except for the GPS. And Navionics. And autohelm…

Well, ANYway, Patreon is an online platform that lets you support artists and creators that you enjoy by pledging a small monthly amount. In return you get some cool premiums, exclusive access to content, and most of all, the satisfaction of knowing you are directly contributing to producing the stuff you (hopefully!) enjoy.

I didn’t want to jump in to Patreon initially, but two things happened:

A lot of folks do a whole “launch” thing with Patreon; but that just wouldn’t be How Not To Sail style, now would it?

I decided to dive right in and just set up the Patreon page, and maybe be able to carve out some more time for How Not To Sail. As of this writing, there’s been no official launch or anything: I just mentioned it on Twitter and Facebook, and that’s about it.

So far, Captain Boomies and a couple other nice folks have been kind enough to become patrons, and you’ll be hearing more about some of our other first patrons soon.

It’s truly gratifying to see the generosity of my fellow #HowNotToSailers. And if you’re interested, I’d love to have ya aboard!

You can become an Able Seaman for as little as $3 a month, and if that’s too much out of the beer kitty, you can set your own amount.

I’ll start out by sending you an copy of How Not To Sail, and making sure your name shows up in the podcast credits and YouTube credits.

And for the first few folks who jump in the boat, I’ll profile you on HowNotToSail.com…even if you don’t have a gig like Captain Boomies.

(If you’d like me to do a Patreon patron profile on ya, just send me a photo in Patreon messages, let me know why you enjoy being out on the water, or what kinda of boats and experiences you’ve had, and I’ll get ‘r done! (This will be only for the first 10 patrons, then it will be reserved for the higher tiers.))

You can join the action HERE:

Anyway, I hope you enjoy Captain Boomies’ YouTube channel…and I hope you’ll enjoy the upcoming interview. (Drink some beer. We did.)