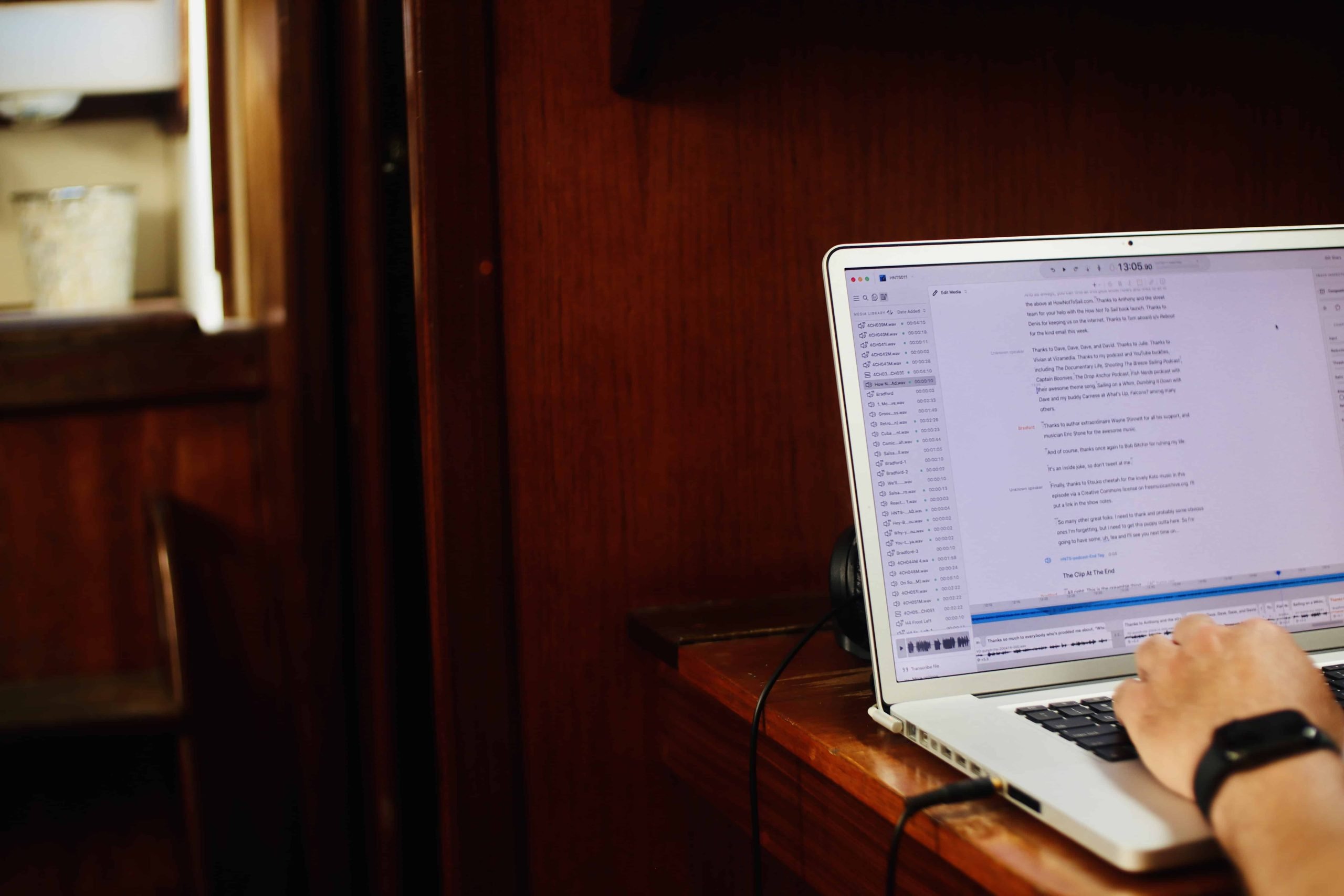 Note: This is the script. The podcast episode is at HowNotToSail.com/11.

Bradford (VO): Bradford here. And if you haven’t heard the first 10 episodes, I encourage you to go back and start with episode one. But who am I to tell you what to do? So anyway, off we go with season one, episode 11 of…

Bradford: Back at you, babe.

Bradford (VO): So here we are in Miami. Finally.  On Valentine’s day.  Might as well do some exploring.

But first I have to grab an alternator from Amazon, and they seem challenged.

Yesterday, they aborted the mission because they couldn’t find the Marina, tucked away in a big retail area on the waterfront.

(Smug voice) But I’ve learned to take these things in stride. Which I suppose is not so hard when you discover you may not need an alternator.

So, I dunno. Since I got here to the Marina–and maybe even before–my voltage thingy on the bulkhead in the gallery has been reading nice and toasty for all three circuits. They’re reading over 14 volts since I plugged into shore power, but it seems like they were even charging properly on the way. Maybe it’s operator error.

Maybe it has something to do with the battery bridge switch thingy that’s also on the galley bulkhead.

I should probably check that out sometime.

But meanwhile it’s time for The Admiral and I had to pick up our press passes at the boat show.  We’ll need them on us to take the ferry over there on Saturday, which is when I’m slated to help out with the Pyrate radio broadcast,  and when I plan to start my vast media blitz for this podcast.

To The Boat Show…The First Time

So we close up the boat and Trek a few blocks over to the American Airlines arena to catch a shuttle bus.

We’ve got our audio gear in case we get some good sound like saying hi to Bob Bitchin and Jody at the Cruising Outpost booth.

And so we’ll look like proper Worldsongs Media field recordists when we pick up our media passes.

Tanya: You don’t want to put that in there?

Bradford: You might have some profound things to say on the way.

Tanya: I doubt it.

Bradford (VO): The air conditioned bus ride over to Virginia Key takes a good 45 minutes,  which is why we took the shuttle instead of Uber.

But eventually the bus drops us off at the front entrance to the boat show, and we head over to will-call for our media passes.

And after verifying, we are who we are, we’re in.

Now we’ve just got to find the Cruising Outpost booth.

But as of this boat show, it’s Cruising Outpost. Which we finally locate and I prepare to get a great bit of audio when we say hi to Bob and the gang.

Of course, there’s this trick to using my Zoom recorder, which I had just shared with The Admiral earlier.

[Audio: demonstrating the recorder to Tanya]

So guess who forgot this important part? You got it. This guy.

So we didn’t actually get the audio of saying hi to Bob and Jody and Jeff and Marie, but it pretty much went like this:

Bradford (VO): And this is The Admiral.

Computer Bob: Why, yes. Good to see you.

Bradford (VO): And Jody, great to see you.

Computer Jody: You too, and great to see Taneya.

Well, at least we did get to say hi, and Jody put out some of my postcards in the Cruising Outpost booth so they could start doing their insidious work.

Even better, we find out that by the time we come back in two days for the cruisers party and Pyrate radio broadcast, the next issue of Cruising Outpost with my ad in it should be available at the booth.

I’m beginning to get cautiously optimistic about this podcast thing.

What could possibly go wrong?

We stumbled upon even more good fortune when we find out that now that we have passes, we can take an actual boat shuttle back downtown.

By shuttle, I mean a large three- or four-story motor vessel. Tanya and I head for the open top deck and as usual, probably get more sun than necessary for Northern European types.

But the view is great as we basically retrace my arrival in Jacie Sails.

Best of all, it turns out that the water shuttle arrives and departs about a half block from the pedestrian entrance to the marina. And Lombardi’s, where we absolutely did not have a frozen beverage or two before getting ready for a Valentine’s dinner.

I’d like to share with you more of our Valentine’s celebration, dear listener, but it ain’t that kind of podcast.

Let’s just say we had a great time and were rarin’ to check out South Beach on our day off before the show.

Friday, February 15th. I think we may die of diesel exhaust.

Okay, maybe I exaggerate a little, but there are two huge party vessels permanently berthed astern of us across the pier. The concrete walkway is a couple of feet above our deck a lot of the time.

And as they endlessly load on supplies and stuff without going anywhere, they run their engines, and well… It’s time to go check out South beach. So we take an Uber over past the cruise ship port to South Beach and complete overload.

But before we dive into the crazy that is South Beach, I just want to remind you that HowNotToSail.com is your hub for all things How Not To Sail. That’s where I post our latest doin’s… Plus show notes for all the podcast episodes and links to my book How Not To Sail, the email list, the private Facebook group which is the  “Community” tab and a quick link to the new YouTube channel, which I’d love if you feel like subscribing to.

But back to South Beach…

Per The Admiral’s wishes, we head to the actual beach first  and… How to describe it?

People. So many people.

Families, couples, groups, planes dragging banners overhead, the smell of weed and the sound of reggaeton.

We retreated back to Ocean Drive.

There, we ran into CJ’s crab shack, which had a nice sidewalk patio and didn’t seem too crazy,  so we had a seat and a conversation with the hostess about the upcoming podcast.

Then The Admiral wanted to see the Delano hotel about a mile up Ocean Drive.

I didn’t even think South Beach was that big.

Fortunately, Tanya convinced me to walk up there with her and we finally arrived at the hotel, which is definitely very cool.

[Talking about pic out front.]

And then stopped in the lobby at the sushi bar near the glass piano where we chatted with a couple of fellows who were in town shopping for a 120-foot motor yacht to replace their 105-foot motor yacht.

As you can tell, The Admiral and I do not fit the average guest profile for the Delano. But we had a large time, and finally full of sushi and sake, we took an Uber back to the Marina.

We wanted to get at least a reasonable amount of sleep. Because the next day was game day.

I couldn’t wait to see my ad in the advance copy of Cruising Outpost.

Well, the promo launch anyway. I’m planning to release the first episode with my Bob Bitchin interview in about two weeks, and follow up quickly with a couple more episodes near the first of March, right when the issue of Cruising Outpost goes out to 70,000 people or so.

But today I’m planning to leverage my appearance at the Cruising Outpost and Pyrate Radio cruisers party to jumpstart everything.

It’s another beautiful day in Miami as The Admiral and I leave the big idling boats at the Marina and join a couple of hundred new friends aboard the even bigger South Beach Lady to shuttle over to the boat show.

So we find the Cruising Outpost booth again, and I eagerly thumb through one of the promo copies of Cruising Outpost as Tanya kvetches  with Captain Marie Inshaw about how I don’t like to carry the dinghy on the davits.

But I’m fixated on my mission.

The ad’s not here.

Oh, but then Marie points out that I’m looking at an old issue.  I knew that.  So now I start thumbing through the new issue even faster. I can’t wait to see the ad. This is the whole linchpin of my release strategy.

I’m trying to process it as I take my laptop and microphone to a side aisle of the show to prep my Pyrate Radio bit for the week.

Indeed. What the heck will I do after this? Make sure you’re subscribed to the podcast and we’ll figure it out together. Heck, maybe you can bring a friend along.

Thanks so much to everybody who’s prodded me about, “When’s the next podcast coming out?” It means a ton to hear from you, so don’t be shy about reaching out to me at [email protected] or on the Twitter and Instagram at @HowNotToSail.

And as always, you can find all this plus show notes and links to all of the above at HowNotToSail.com.  Thanks to Anthony and the street team for your help with the How Not To Sail book launch. Thanks to Denis for keeping us on the internet. Thanks to Tom aboard s/v Reboot for the kind email this week.

Thanks to Dave, Dave, Dave, and David. Thanks to Julie. Thanks to Vivian at Vizamedia. Thanks to my podcast and YouTube buddies, including The Documentary Life, Shooting The Breeze Sailing Podcast , Captain Boomies, The Drop Anchor Podcast, Fish Nerds podcast with their awesome theme song, Sailing on a Whim, Dumbing It Down with Dave and my buddy Carnese at What’s Up, Falcons? among many others.

Thanks to author extraordinaire Wayne Stinnett for all his support, and musician Eric Stone for the awesome music.

And of course, thanks once again to Bob Bitchin for ruining my life.

It’s an inside joke, so don’t tweet at me.

Finally, thanks to Etsuko cheetah for the lovely Koto music in this episode via a Creative Commons license on freemusicarchive.org. I’ll put a link in the show notes.

So many other great folks. I need to thank and probably some obvious ones I’m forgetting, but I need to get this puppy outta here. So I’m going to have some, uh, tea and I’ll see you next time on…

The Blooper/Reprise Clip At The End

Bradford: All right. This is the preamble thing… (AC turns on)