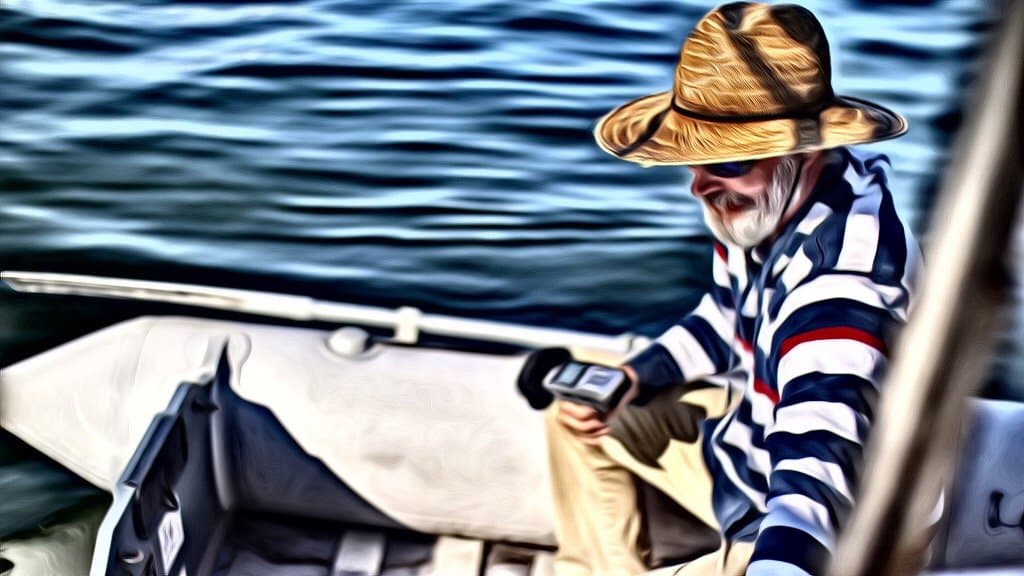 So we are at anchor in Boca Ciega Bay. A quiet sunrise. Not many people are out.

I decide to record some ambience for the podcast (or whatever). It seems like a good time to get some clean recording of the gulls and the water.

After my Zoom H4n recorder boots up, I wait for a boat to pass. I press the record button twice, to arm then record.

As the time streams off on the display, the first I capture is an airplane. Then I hear:

You can listen to exactly what I recorded here on Freesound.org. (Heck, download it if ya want. I’ve got some random other SFX posted, and I’ll be adding more sailing and nautical sounds soon as I organize my stuff.)

(as The Grinch would say…)

I guess what I’m getting at is that, until you’ve been at sea, or in a remote forest or the desert or something, it’s hard to appreciate how much noise surrounds us in our daily lives.

We’ve become so insensitive to the noise around us that it even seems perfectly reasonable to plop down next to me at my favorite mexican restaurant (upon the patio of which there is already a selection of appropriate music playing)…and proceed to yack it up on FaceTime with your girlfriends or homebuoys.

I digress. (But don’t be That Person.)

On our back porch in Atlanta, you almost don’t notice the pink noise of I-285 a few blocks away. It’s buffered by trees and those highway-sound-barrier-thingies, but it still makes its way down into our little valley.

Come to think of it, there’s a railroad no closer than two miles to our place, and by some crazy trick of acoustics, we can hear not only the train horn but also the faint rumbling as it rolls through the area. Weird. (This one doesn’t bother me, if you’re keeping score.)

Here in Gulfport (St. Pete) Florida, we can hear traffic from nearby I-275. You may be able to hear some of it in the recording. (Both here and in Atlanta, sports-model motorcycles seem to be the most identifiable vehicles.)

And the noise isn’t always coming from outside the boat. When we’re tethered to land, we’re necessarily tethered to noise.

After listening to someone operating what sounded like a small chainsaw somewhere in the marina, The Admiral said, “One good thing about the air conditioning being so loud, it covers up all the other noise.”

Yeah. We go to sleep with that damn thing on. In the v-berth, it’s like being inside a big deep-humming machine.

(I’m pretty sure I’ve recorded that, too.)

How Far Do I Have To Go?

So how far do I have to go to get an audio recording without the sounds of human society? Well, I guess the closest way is to get out into the ocean. About five miles oughta get rid of most human noise. Ten or twelve miles should cut out just about everything but the ocean, your boat, yourself…and I suppose the occasional airplane overhead. (That’s about the extreme limit of cell service as well, in my experience.)

So I guess it’s well nigh impossible to completely escape human-made sounds anywhere. (Way out at sea, out of airplane flight paths, maybe.)

Which kind of deflates the idea of trying to record seagulls and crows and such without human sounds. They probably don’t even congregate much where humans aren’t around. They wake up and get active about the same time we do. So I guess it’s a fool’s errand after all.

So maybe it’s hard to get pristine ambient recordings near the shore without planes and sirens and traffic and such.

But if you want to get your Zen on, just head offshore a couple of miles. You’ll be glad you did.

[Um, my attorneys have politely instructed me to mention that you should in no circumstances sail or boat offshore. You might hurt yourself, other passengers, or other boats. So definitely don’t go offshore. In fact, just leave that boat parked at the marina and occasionally visit it to run the air conditioning.]