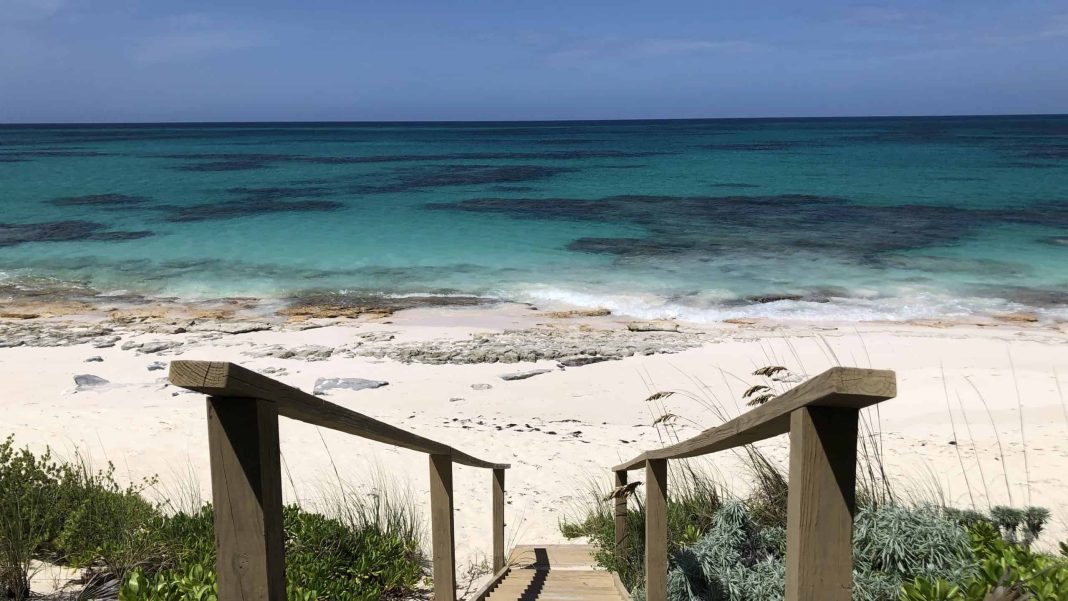 Don’t visit here! (We want it all to ourselves!)

Some tidbits from our getaway for The Admiral’s birthday. I’m a little confused that we’re not sailing there, but I can deal with this. I’m sure we’ll be back in Jacie Sails.

The day started…yesterday. I stayed up all night, getting Episode 7 of the podcast posted by midnight, and then puttered around with that for a while and finished packing. I’m headed to Podcast Movement 2019 right after this trip, so I wanted to get that out.

Plus, I figured a few folks might want to know what happened under the bridge. (If you haven’t heard the podcast yet, though, I recommend you start with Episode 1: Bitchin.)

Tanya and I took an Uber to the airport around 3:45, in case of any security lines. The JetBlue check-in folks pointed us to kiosks where we were supposed to print luggage tags — although they weren’t exactly swamped. At the counter, my bag weighed exactly 50 pounds when I put it on the scale, the break point for an extra fee. Moments later, it corrected to 50.4, but I had already paid.

We stood in line for about ten minutes until the TSA Pre-check line opened, but it was smooth sailing from there. Somehow, Tanya had Pre-check on her boarding pass, even though she doesn’t officially have it. We didn’t bother pointing that out, and we breezed through without the usual shoes, belt and laptop removal.

The folks on the Airbus 300 to Fort Lauderdale were an interesting bunch, and JetBlue had a full flight. We were delayed for fifteen minutes “just clearing up a maintenance issue.” (What the hell?!??) But we got there without incident.

We couldn’t figure out why our connection wasn’t showing up. Turns out we needed to take a long hike out of Terminal 4, down the sidewalk to Terminal 1, and go through security again.

I lost my West Marine multitool passing through security this time. If Tanya had gotten her TSA Pre-check certification like I had, I’d probably still have it. (At least, that’s the routine I was putting down at the time. If I’d remembered to leave it at home, that would have been even better.)

“Give it to a sailor!” I hollered to the lady as she carried it away.

Download How Not To Sail on Kindle. (Or get it in paperback, your choice!)

They had a field day with my old backpack full of cables and electronics. I hadn’t even thought about the multi-tool lingering at the bottom of the main exterior pouch, which also contained earbuds, charging cables, pens, earplugs, an XLR-to-iPhone adapter, my wallet, and so much more.

Tanya bought me a consolation beer at Shula’s while we waited to board the flight to Governors Harbor.

The turboprop serving as Silver Air Flight 76 bounced a little as we passed over some rain clouds en route to Eleuthera, but it was nothing much to me. I wanted to have a piss. Of course, right at that time, the flight attendant informed The Admiral and I that we needed to keep to our seats.

After the promised turbulence failed to make a respectable appearance, she said I could get up. Tanya switched to the window seat while I went forward.

The head in the little plane was so small, there was no chance of me bouncing around if we did encounter any rough air. I crammed myself through the door, put my hat on the counter, bent my knees and braced my shoulders against the sloped ceiling while I had a long leak.

When we walked down the ladder from the plane, the light was blinding. I let the big deaf guy who kept bumping my seat and his lady go first. Then I told Tanya to go ahead, while I pried my backpack from under the seat.

The customs and immigration building reminded me of Union Island: a little block building with red tile roof and air conditioning.

All of the non-residents were supposed to have the name and local phone number of the “friends” they were staying with. All I know was the owners of the AirBnB we rented were Carolyn and Allan. But I powered up the iPhone with its remaining 11% charge and dug up the local number they listed, and added the 242 area code for Eleuthera.

The immigration lady was friendly and wished us a good stay. Then the customs guy had a polite but desultory glance through our two checked bags. I noticed the black zip tie I secured the zipper with before leaving was still intact.

When we finished with Customs, the guy held the door as I guided my 50-pound bag out the door.

As we stepped out under the shade of an overhang, a man asked, “Are you looking for Sue?” He smiled at us.

Sue was standing next to him, a mocha-colored woman of maybe sixty, with a small gap in her teeth. She led us to a worn dark blue Chevy Equinox SUV with a Jesus fish on the back hatch, and asked if we knew about the left-side thing.

“Oh, yes,” I said, although I’d been wondering how it would feel. Thankfully there was a helpful sticker on the windshield.

“Are you going straight to the house?” she asked. “You can follow me, if you like. That will help you get used to it.”

“That’d be great,” we said. The bill was four hundred ninety dollars cash. I counted out four hundred and forty from my wallet, and retrieved some more from the stash in my backpack, giving her five hundred total.

“We appreciate the help,” I said.

“And the curbside service,” Tanya added.

“And the curbside service.”

Driving on the left side was strange to get used to. The wheel is still on the left, but instead of the driver facing the oncoming traffic, here it’s the passenger.

Tanya found that unnerving, but after blaming her for losing my multi-tool, I figured it was her penance.

“And I know who’s cooking breakfast,” I said, patting her on the knee. She shook her head and stared at the oncoming lane.

We drove into Governors Harbor proper — and dear God, the water was beautiful turquoise on our right, in the mid afternoon sun.

At 3 J’s in Palmetto Point, we turned left off Queen’s Highway and drove through some sketchier neighborhoods. Sue pulled off into a driveway on the left as we neared a t-intersection.

“Just go to the right here, and follow it for a little while. You’ll see Off The Reef. Make sure to look for the hill first.”

We thanked her, and waited for her to turn left onto the road. She honked, and I gave a weak honk back, realizing just a hair too late that she was honking at the lady on the porch just across the road.

We turned right and followed the road, which immediately began to shrink, encroached by trees(?). After a while (and some smaller hills), the pavement ran out, replaced by a sandy one-lane double-track. We pulled over once to let a flatbed truck with a couple of men on the back pass us, going toward town.

We passed Conch’d Out and a few other clever-named places.

After navigating a short section where the left side of the road was so rutted that we scraped the bottom of the SUV — and about to turn back, thinking we’d passed our destination — we came up a hill; and there, on the left, as we pulled up the sandy gravel driveway, was…this.